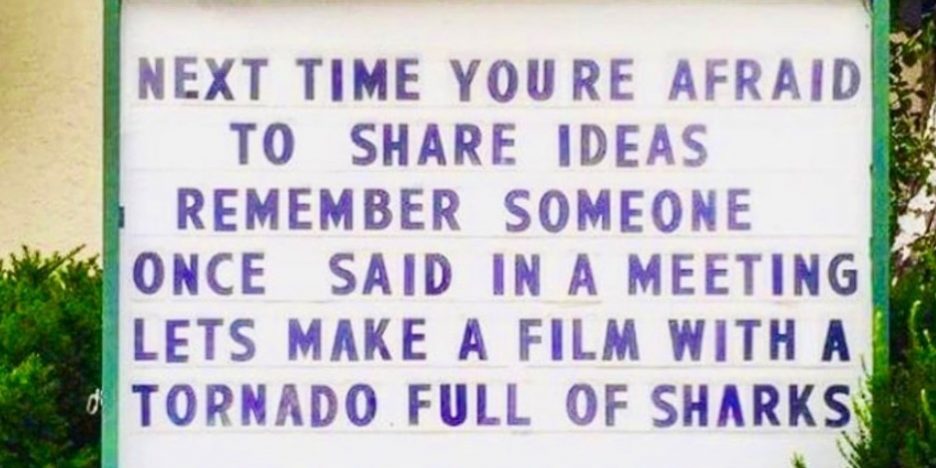 Inspiration can make its way to us in strange and hilarious forms. I recently came across a fantastic sign referring to the series of Sharknado films always shown on the Sci-Fi channel, particularly during Shark Week in August. When the first one was released I was amazed that something so cheeky and full of total nonsense was greenlit through the studio system…even more amazed that it found a huge audience that loved it, went to see it with audio commentary at select theatres, and that it became a cult classic. Fast forward a few years- it has more than 5 sequels! As a professional writer I had difficulty understanding what its success was attributed to: timing, comedy, guest stars, the Shark Week tie-in?

I may never understand completely. The films are fun and ridiculous but the need for sequels still makes me shake my head. But I realized something vitally important from the films and the sign that can benefit ALL creative people. At times we can feel stuck or unconfident or afraid to voice an idea. Here are a few ways to push past thinking that you aren’t ready or good enough.

Sharknado can teach us something. Maybe not its plot but the fact that it exists at all. As confused as I was by its appeal, somewhere, someone is doing GREAT financially because he/she created a movie series about killer sharks flying around in a TORNADO and threatening guest stars famous from the 80s and 90s. Why shouldn’t YOUR well-written, well-conceived, thoughtful, fun, crazy project be heard? Why shouldn’t you be in the position to move it forward? Luck is born from vision and hard work. Projects come alive from one foot put in front of the other, making small steps each day. All you need is to open your mouth, draft a pitch, send an email, and believe in its vision. Somewhere, someone will align, understand, and want to help.

Don’t allow yourself to be intimidated. Sharknado has four sequels, if not more, at this point. We want your ideas. We want to collaborate with you. We want to bring what we do to your table and create alongside you. We all need to get moving with our own work and ideas. There’s a tornado out there for each of us.